Four Lighthouses (or Why You Matter)

Many thanks to Teresa Romain/Access Abundance for the inspiration.

Have you ever thought about what it’s like to be a lighthouse? I have. Of course, I am a lighthouse, so I guess it’s only natural. I’m nothing special. Wide and a little on the short side, I’m not even 100 feet tall, though I do sit on the bluffs overlooking a very large lake. The lake gets a lot of marine traffic, most of it well to my west. I’m on the eastern coast, where a few ships glide by and storms rarely hit. The main marine channel is along the west side of the lake, and that’s where the bad weather tends to be the nastiest. 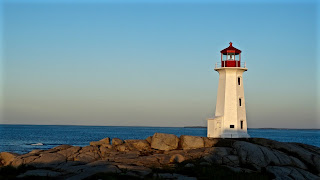 There are three lighthouses on that side of the lake. On the northernmost point is a famous lighthouse that people travel from all over the world to see. It’s everything a lighthouse should be: tall (181 feet), strong, with a very bright light. It’s survived every storm without appearing to age a day. In fact, on the rare occasions that tourists come to visit me, I hear things about this lighthouse. That it almost never needs repair. That it is one of the most picturesque lighthouses in the world, part of it painted in a sleek black paint that almost looks like leather. That if you had a lighthouse fetish, just looking at it would make you weak in the knees. It even has a foghorn, loud and low. If there was such as thing as a badass lighthouse, this one would be it.

The lighthouse just south of that is the tallest lighthouse on the lake, a whopping 204 feet tall. People love to visit it, and I hear that tourists can even climb the lighthouse, to see the view from so high up. It also is a picturesque lighthouse, a gorgeous tan color that never seems to fade or get dirty, topped with a brown cupola and gallery that make it look almost like it has long hair, which tourists say is adorable. But what I hear most about this lighthouse is that its light is so gentle and warm, nearly everyone who’s ever seen it says it’s like being smiled upon by the sun. This ginormous lighthouse has survived the strongest storms, including some straight-line winds that came through nearly ten years ago. The winds cracked part of the tower, but it never failed to light the way, and after only a little repair, it was even stronger than before.

To the south, the third lighthouse is an enigma. It’s not especially tall, about 160 feet, but it attracts tourists from all over just because it’s nearly everything one would never expect from a lighthouse. Instead of a bright white light shining over the lake, its light is a bright blue, almost glowing in its intensity. And it is painted the most bizarre of colors, multi-colored polka dots visible along one strip of its tower, contrasting zig-zags along another, some sort of random paint splotches on a third, and, from what people have said, another strip is always something different. No one ever sees anyone out there painting, yet whenever locals revisit the lighthouse, it’s always new. Tourists love to take photos in front of this lighthouse, and often find themselves letting loose and having fun, taking goofy photos of themselves and each other, often making new friends in the process.

It’s hard, quite honestly, to be a short, unremarkable lighthouse on the other side of the lake from these three other lighthouses. Most nights, I shine my unremarkable light onto water that is shipless. I wonder, more often than I’d like to admit, why I was even built here. It seems I’m never needed, while it’s clear that the three lighthouses on the other side of the lake are both needed and wanted.

I begin to dream about what it would be like to be wanted and needed as they are. I’d have to be taller—much taller—and brighter, and somehow stronger or more beautiful or weirder. I’d have to be different, something that both ships and tourists alike would appreciate. This thought consumes me and sometimes my light sputters. But that’s okay, because it’s not like it’s actually needed, anyway.

And so one night, I lose myself in a dream about having a lighthouse makeover. In the dream, I have moved to the western coast of the lake, grown nearly 100 feet, and am trying out different paint colors and patterns. I’ve tried changing my light color too, even experimenting with a rotating rainbow of colors. I’m so engrossed with exploring all the variations between stately and silly that I don’t notice at first that the wind has picked up. It isn’t until I hear the howling that I realize a storm has arrived, but that makes sense, because I’m on the west coast now. I wonder if it’s possible to be beautiful and strong and courageous and fun.

I’m trying to figure out how to do that when a large branch hits my tower and I’m suddenly back in my place on the eastern coast, wind howling around me, trees bent almost to breaking. Hail arrives, making visibility almost nonexistent. I am so disappointed that I’m back to being unremarkable, not-beautiful, not-strong, not-courageous, and most definitely not-fun, and I let my light grow dim and hunker down to sit out the storm.

And then I sense it: a ship on the lake, very much in trouble. And it’s headed my way. This is not good. The reason the western coast is the main marine channel is because the lake is deeper there. Where I am, it’s much shallower. Ships know not to come this way. But this ship is being driven by the wind, unable to see through the hail and rain, and it will crash on the shoal if it’s not warned away.

I put everything I have into my light, yelling as loud as I can through my rarely-used foghorn. I’m not used to the exertion and the effort tires me, but I know that I cannot allow this ship to sink. One of the bulbs in my light flickers and threatens to blow, but I can redirect some of the energy and keep it from overloading. I keep scanning the horizon, looking for some sign of the ship itself, but can barely see through the weather. I cannot tell if the ship is still coming closer or heading back toward the marine channel.

For weeks after that, there are no more storms on my side of the lake, and I am back to thinking about the three amazing lighthouses across the water from me. And then one day a bus pulls up and dozens of people get out, standing around me and taking photos. I am confused. Don’t they know that the picturesque lighthouses are on the other side of the lake?

As I stand there, I catch pieces of their conversation.

“I thought for sure this lighthouse would be taller.”

“Have you ever seen a light that bright come from a lighthouse?”

“I can’t believe this little lighthouse out here all alone saved our lives.”

And then I understand. This is the crew of that ship standing around. They are here and not dead or injured because of me.

The thought is stunning and I have a hard time believing it. I argue against it, listing again all the things I am not. How many lives have the other three lighthouses saved? It must be thousands, hundreds of thousands.

One of the ship’s crew comes over to my tower and puts a hand against me. “You keep that light shining, you hear?” he says softly. “We’ve traveled this lake hundreds of times and never knew you were here. And then the one time we really needed you, you were there for us. I was able to make it home in time to be there when my wife gave birth. I may see those other three lighthouses more often, but you’re the one I’m going to think about.” With that, he pats his hand on the side of my tower and walks away, hands in his pockets.

And then, as I watch the bus pull away, I think that maybe, just maybe, it was kind of a badass thing that stormy night for me to keep going until dawn. Maybe, just maybe, I was stronger than I thought. There’s no doubt in my mind now that knowing one of the crew got to be with his wife while she gave birth is a thing of beauty.

And maybe, just maybe I don’t need to be an odd lighthouse. Maybe I just need to be me. Where I am. As I am.

Though a few new colors on my tower could be fun.

← Previous article: To Fight or Not to Fight #AKF Next article: On Family →

SET IN MOTIONThis is how everything changed.This is how a life was saved.This is my story.Trigger warning for a brief...

Can you guess which of the following paid occupations I've NOT had?1. Law clerk2. Mental health counselor3....