Despite the tragic and devastating news from Orlando, there are still good, kind people in the world. I know, because I met two of them yesterday in Chicago’s Midway Airport during what was one of the most embarrassing experiences of my life.

Allow me to explain, and in some way, thank them.

I was in Chicago this past weekend for the Printer’s Row LitFest, doing authorly things like chatting with readers, networking with other authors, speaking on a panel about my complicated path to publication, and signing books. Saturday was hot and muggy, but I’ve been in the Midwest for 23 years, so I’m used to it by now. Sunday—the day I did my panel and signing—was gorgeous.

I arrived at the airport at 3:00 p.m. Sunday for a 5:20 p.m. flight home, sailed through security (thank you TSA Pre√), and ordered a lovely tuna salad sandwich at Manny’s at 3:30. And that’s when everything went south. Kind of literally.

As I finished my sandwich, I had a sudden and extremely urgent need to use the restroom. I grabbed my backpack and CPAP bag and found a restroom right around the corner. And the moment I went through the restroom door, I knew I wasn’t going to make it.

I’ve had IBS (Irritable Bowel Syndrome) for over 23 years (one of my many diagnoses) and have been lucky that this had only happened to me once in public. Until now. 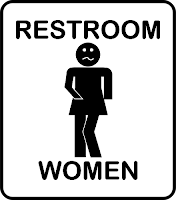 I had zero control over the muscles I most needed and every step let more out. Mortified, I ran for the nearest stall and slammed the door shut. I threw my bags on the floor and tried to lock the door, only to discover that the lock didn’t work correctly and I had to angle it oddly and smash on it with the heel of my hand to get it to fasten.

I made it to the toilet but it was abundantly clear that some serious damage had already been done. Any of you who have had infants will likely remember diaper blowouts. This was an adult-sized version.

Despite the copious amount of material in my underwear and shorts, and on the floor in front of me, not to mention on me, my body had more to do on the toilet, complete with pain and cramping that left me in a cold sweat. The thoughts that went through my head included:

I should lose at least ten pounds with this.
What happens if I dial 911 from the restroom?
I wish I had paper on which to write “Do Not Use” and tape to stick the note to the door.

With my bowels finally empty, I took stock of the situation, trying to quell the growing panic. It was 4 o’clock and my flight boarded at 4:20. I had no change of clothes with me; all my clothes were in my checked luggage (that’s going to change for my next flight). All I could think of was to wash my clothes as best I could. Fortunately, I had a source of clean water under my bum. Unfortunately, I had a lot to clean up.

I began to clean myself with toilet paper, grateful that there were two huge rolls in the dispenser. As I pulled the paper, the front panel of the dispenser fell down on me, so I had to pull paper with one hand and keep it on the dispenser roll with the other. Half a roll and a dozen flushes later, I was pretty sure I’d cleaned all of me that I could. Then I started on my underwear, trying to use the suction of the flushes to rinse them. It didn’t work nearly as well as I imagined it might, and I filed that away. Do not use this trick in a book. Doesn’t work.

I’d have to throw out the underwear. Next, I looked at my shorts, which were—of course, because nothing should be easy—denim. I couldn’t do this in the toilet. I nearly broke down and cried then. A few people had commented to me over the past few months that I seemed to be living a charmed life. Doesn’t look much like a charmed life now, does it?

I had only one recourse now: venturing out of my stall half-naked.

Just then I heard a woman exit a stall near me. I fought with and opened my stall door a crack and peeked out. “Excuse me,” I said, near tears.

The woman turned around and the first thing I noticed was a stethoscope around her neck. A doctor? A nurse? Thank G-d!

The woman winced. “You’re going to miss your flight. Are you bleeding? Is it blood? Do you need me to call you an ambulance?”

She glanced around, then back to me. “There’s a sink right around the corner here, next to a changing table. There’s no one in here. You’re safe. I’ll start the water for you.” She disappeared around the corner and I heard water turn on.

I grabbed my bags with one hand and my soiled shorts and underwear with the other, and sidled, bare-assed, over to the sink. The woman with the stethoscope was gone.

The underwear went into the trash, my bags went onto the floor away from the sink, and I started to rinse my shorts. I had miscalculated the amount of material I needed to rinse out of my shorts, and it turned into an extremely gross, messy job. As I rinsed, I started to cry. I kept checking my watch. 4:25 p.m.

I rinsed and scrubbed and tried not to panic. And I prayed. I wondered irrationally if my prayers from a Chicago airport restroom were voided because I was at a literary festival instead of in shul on Shavuot. My continued grieving over having to leave my former shul left me ambivalent, even a bit angry, this year at Shavuot, which used to be one of my most favorite holidays.

Nearly a dozen women came into the restroom as I scrubbed and rinsed and prayed. A few looked at me, standing sideways at the sink, my butt up against the wall and my now-soaked shirt mostly covering my front, and immediately averted their eyes. I could read their expressions: I don’t want to get involved. The others walked past as if I wasn’t there.

I started “shoulding” on myself as I washed. I should have brought a change of clothes. I should have gone to the bathroom before eating lunch. I should have never come to Chicago. I took a deep breath and tried to relax. No. I am here, now. Deal with the present moment.

Two women came into the restroom, chatting and laughing. I saw them in the mirror over the sink I was using. Pretty. Athletic. Nice clothes and makeup. One blond, one brunette. They saw me and immediately, as if one person, made a beeline for me. “Can we help you?” one of them asked.

“I don’t know how,” I said, my voice catching in my throat.

“There’s a sportswear store around the corner,” the other said. I remembered passing it on my way to Manny’s. “How about we get you some new shorts?”

Gratitude and realism collided. “I don’t know how much money I have,” I said.

“No, don’t even think about that,” the first one said. “We’ll be right back. We’ll bring you a bag for your shorts too.”

Again seeming to be one person, they turned in unison and left the way they came in. I had hope for the first time in an hour.

I kept washing, wanting desperately to trust these women, but knowing that I needed to be prepared to put on wet shorts and hope to catch my flight before it left. I checked my watch again. 4:40 p.m. Finally the water ran clear as I rinsed my shorts. I wrung them out as best I could, picked up my bags, and sidled, butt against the wall of sinks, toward the sole air dryer in the bathroom: a Dyson Airblade.

Dyson Airblades work awesomely on hands. The pressure of the blowing air even gets under watch and FitBit bands. They do not, however, work so well on denim. I dipped my shorts in and out of the Airblade until it automatically stopped, rested for a few seconds, and then went at it again. Several rounds into this, the blond woman returned with a pair of gray athletic shorts.

She looked concerned for a moment, gazing at my previous location at the sink, until she saw me at the air dryer. Smiling, she held the shorts out. “I hope they fit.”

I left my shorts in the Airblade and took the shorts, held them up. “These will be perfect,” I said, now nearly in tears of gratitude. “I can’t thank you enough. Can I reimburse you? I can send you a check if I don’t have enough cash.”

“No, no.” The blond woman waved my suggestion away. “This was our pleasure. I just hope they fit and you can have a better day.”

I held up the shorts. “This guarantees a better day. You literally saved my ass.”

She smiled. “I know. We all have to help each other out.” Before I could say anything more, she left the restroom.

I put the shorts on. They fit perfectly. It felt good to finally have some protection on my lower half. Moments later, the brunette woman came in with a plastic trash bag. She noted that I had the shorts on.

“Thank you so much,” I said. “I told your friend, you literally saved my ass. I don’t know how to thank you. I’d really like to reimburse you.”

“No, definitely not,” she said. “This happens to all of us at one point or another. It’s happened to me. We’ve got to watch out for each other.”

“Then I’ll pay it forward,” I said, stuffing my wet shorts into the bag.

She grinned. “Perfect. That’s the best thanks of all.” Then she also left the restroom.

I washed my water-logged hands, gathered up all of my stuff, and speed-walked to my gate. To my amazement, people were exiting from the Jetway door. I double-checked my information. Yes, I was at the right gate, which had been changed a mere ten minutes before my bathroom experience.

The gate attendant got on the microphone. “Ladies and gentlemen, I apologize for the delay. Our aircraft has been downgraded so we will need to reassign seat numbers for everyone in coach. We’re also asking for two wonderful volunteers to give up their seats in exchange for a $400 flight voucher from Delta good for one year, and we’ll get you onto the next flight into Minneapolis/St. Paul. We’ll start our pre-boarding in about ten minutes.”

I opened my Delta app and verified my seat number. I’d managed—for the second time—to get a first class seat for about the same cost as coach plus one checked bag, so my seat was unchanged. And I hadn’t missed my flight.

I felt humbled. I didn’t have to wear wet denim, thanks to the kind generosity of two strangers. Three, if you count the woman with the stethoscope who gave me the courage to head out to the sink. None of this could have happened if I’d stayed locked up in my stall. I glanced skyward and closed my eyes. Thank you.

It was only after I boarded the plane that one incongruity stuck out: the two women who bought me the shorts never actually used the restroom.

SET IN MOTIONThis is how everything changed.This is how a life was saved.This is my story.Trigger warning for a brief...

Can you guess which of the following paid occupations I've NOT had?1. Law clerk2. Mental health counselor3....