Be careful what you ask for, the saying goes, because you might just get it. That can be a problem.

In an author’s world, there is no such thing as enough. There’s always the next book, the next review, the next reader, the next appearance, the next award, the next book contract. Sure, some few lucky writers have more than they ever could have dreamed of in royalty income. Their award shelf is sagging with the weight of having won every award given in their genre. Some might call that enough. But no true writer I know of has ever finished writing a book and said, “Okay, I’m done now. No more books.”

This past May, I was feeling pretty down, coming off the temporary high of seeing interior and cover files for Strength to Stand go off to the printer. This book was a long time in coming. I’d finished most of the book by 2006, with the exception of one scene that my editor wasn’t buying. The manuscript languished as I put all my efforts into my day job and my kids. Years passed, and while I felt the pull to return to that manuscript, it wasn’t until a good friend prodded me into rewriting that one scene, late in October 2014, that I finally picked up the mantle of author again.

I was a writing machine for two months, the book coming together seamlessly. In January 2015, it was back in my editor’s hands. By April, Advance Reading Copies (ARCs) were being prepared, and by May, I was four chapters into writing book 3 (No One to Fear) in the series. And then I did the Bad Thing. The Bad Thing that authors should never do if they want to keep their sanity. (No, not that one. The other Bad Thing.)

I compared myself to other authors.

I was skimming through Facebook and seeing posts from fellow author friends, some struggling with their work in progress (WIP), some also anticipating a new release in the fall, and then others who were awash in good news—every few days a glowing review or the announcement of an award won.

If you’ve ever compared yourself to someone whose life’s work is somehow related to yours, you know the inevitable outcome: when you compare yourself to others, you always, always lose. I am now convinced that authors should only ever compare their current work to their work from at least a year ago. No one else’s. Ever. 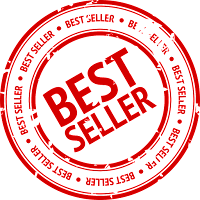 But the book industry thrives on comparison. “If you like x author, you’ll like y author.” The various bestsellers lists are all about ranking sales, and if you know anything about the book industry, you know that sales are not a factor of how good the book is. Rather, sales are a measure of how effective and broad the marketing campaign was (hint: $$$). But any author who is deemed a “bestselling author” will claim the title without asking any questions, and they certainly won’t ask if they’re now a bestselling author because of the quality of their work or because a well-timed publicity campaign followed by a few Goodreads giveaways happened to go viral and it could have happened to anyone.

And then there are awards. The ultimate in comparison. Awards are supposedly an objective ranking of the best books in any given genre. But even this is suspect. Awards judges have biases, including sometimes a bias against Jewish books, no matter how well they’re written, or a bias against small presses, no matter how beautiful and professional the book appears.

I felt sure my book, which wouldn’t even be out for another five months, was doomed to fail.

I wrote an impassioned note to an authors’ group in which I’m active, hoping for some comfort or support: “I’m finding that as I’m seeing all the awards nominations and the photos from conventions, reading about new book deals and bestseller lists, I’m happy for those involved, and it’s also kicking into overdrive my tendency to compare myself to others, in which I always lose.

It’s hard sometimes to remember that I write the books that are in me, in my soul, not the books in someone else. I don’t write for the purpose of winning awards or making a bestseller list, though both would be welcome acknowledgments.

I’m learning to focus on my own writing, on being true to that part of me that MUST put words to paper, reminding myself that I’m me and you’re you and there’s no need to compare. And yet…”

The responses were as expected: Yep, that’s life. Keep on writing. Me too. One author posted a blog article on writer envy. I didn’t want to admit this was what I felt.

Another well-published author sent me an email in response, and managed to hit the nail on the head, saying their reaction was twofold: happiness, on the one hand, for these other authors’ successes because they deserved them, and a mixture of hurt, despair, and even anger, that after years of writing and being published, they still didn’t see the level of acknowledgment these other authors were now enjoying.

That was exactly it. I was thrilled for my author friends, who were finding such success (and with their first novel!), and at the same time, there was a little voice inside asking, “But what about me?”

Ten days later, I learned experientially that I should be careful what I ask for.

Ten days later, Destined to Choose, my first book, the one that was first published back in 2003, which was re-released as a tenth-anniversary edition in 2013, was named a National Indie Excellence Award finalist. Kindle sales of Destined to Choose spiked and it ranked #1 in the Kindle store under Jewish literature. Back on the authors’ group, I felt like eating crow.

Sometimes we human beings learn best by experiencing what we need to learn. And often times, especially for the hard lessons, the Universe decides to teach us also through repetition. So it was with me, though whether that’s because it was a hard lesson or because I have a hard head remains to be seen.

By the end of May, about 180 ARCs had been sent out to reviewers, bloggers, magazines, newspapers, and journals. I figured by August, I’d start seeing reviews. August 15th came with nary a review, and not knowing where to turn, I emailed my publicist, trusting her experience and trying hard not to whine.

“Oh, who knows?” my publicist said, adding that many reviewers shoot for publishing reviews closer to a book’s pub date (in this case, September 1st), so I may see more in September. Some may hold on to reviews until late fall, since the book takes place during Chanukah, and then they could review it as a “Chanukah book.” (It isn’t, really, but I could see the point.) In any event, she instructed me to keep working on those things I could control, check in with some of the places to which ARCs had been submitted, and let the rest go.

A trusted advisor pointed out to me that, really, I’d already received reviews in the form of blurbs. They were all fantastic. No one said, “Sorry, I can’t blurb this; I didn’t care for this book.” The same advisor asked me what I felt about this book.

“I love it,” I said. “I think it’s a better book than the first one, though I’m loving book 3 even more than the second one.”

“Isn’t it a sign of growth as a writer that each successive book is better than the one before it?” she asked.

“Yes. It’s when the first one is spectacular and the second one tanks that you have a problem.”

“And you love Strength to Stand?”

I had to separate out my own feelings from what I’d taken in from others. “I do,” I said.

“Then there you go.”

I’d gotten myself to the point where, even if no one else reviewed Strength to Stand, I still believed in it. I still loved it. I was coming to understand that reviews didn’t define my book, and they certainly didn’t define me. I could live with that.

And then this morning, I received an email with a link to a review of Strength to Stand, which reads in part: “Sheyna Galyan offers a sophisticated blend of insight and entertainment; suitably complex, flawed, and yet commendable characters; well-developed action and suspense; and an authoritative rendering of synagogue-centered Jewish life. This is a very fine book group selection and teaching text.” The review will appear in the fall issues of three publications in Florida.

Okay, I get it, Universe. Really. Do I have to eat crow again?

One Year Ago Today

One year ago today was the last time I gathered with people who were not my household family members or medical...

Stay In Your Lane

I spent several weeks in June helping my oldest son get all the practice he needed to take his driver’s license road...